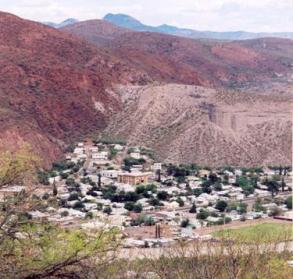 Herbert Eugene Bolton, the noted authority on Coronado’s 1540 entrada into Arizona, believed the Conquistador's true trail from the Gila River to angle off toward Fort Apache, thence toward McNary and St. Johns. Others, with convincing reference to plausible landmarks, still hold out for Clifton and the Rio San Francisco. While the final truth may remain unknown, the split opinion brings to mind the remarks of Pedro de Casteneda, chronicleer of the expedition: “Granted, he did not find the treasure of Cibola, he found the treasure lay in his footsteps”.

In any event, more than three hundred years passed by before the Clifton treasure house was opened. Remoteness, hostile Apache bands, as well as legal questions, unresolved until the Gadsden Purchase all contributed, in one way or another, to the wait. Then in 1864, Henry Clifton, Recorder of the Hassayampa Mining District, and for whom the city of Clifton is thought to be named, learned of placer mining in the area and journeyed overland. There, among the cliffs and canyons where Chase Creek joins the San Francisco, he found signs of copper, but gold and silver were still the metals sought, and the copper went undeveloped. The placers were there, but they produced very little, they were run by a handful of Mexican Nationals and remnants of Carelton's men from the California column.

However, in 1870, the growing demand for copper brought a renewal of exploration. Soon the town of Metcalf arose upon Chase Creek, five miles to the north. The Longfellow Mine was opened, and when Henry Lesinsky brought this and other nearby claims, the stone smelter he constructed on the spot proved to small and a larger one was built at Clifton, where waterpower was available. Once established as a smelter site and as a trans-shipment point for copper, Clifton’s future was assured.

Very early, in 1879, Clifton claimed the distinction of possessing the first steam-powered railroad in Arizona-making runs between the Longfellow Mine and the Clifton smelter. In the early eighties, the railhead of the Arizona and New Mexico Railroad was extended from Lordsburg, and Clifton became a terminus. Along with the boost to civic pride and economic well being, this development ended the difficult and dangerous haulage by mule and wagon, which were often attacked by Apache ambush.

In spite of the attacks, floods, mine fires, and the coarse standard for the mining camps of that day were easily taken in stride by the people of Clifton. At one point, in fact, during its years of lusty, roaring growth, it was known as being the second toughest town in the west. The community standing first in this honor was not specified.

But changes comes to all things, be they natural or man-made. In time the high-grade ore-twenty percent and more at the Longfellow - was depleted, and the direct-smelting process became uneconomical. To meet this problem, various forms of concentrators were constructed, and during the Depression years the flotation process, now in use by Phelps Dodge, was developed to exploit the very-low grade ores of the Morenci Pit, then in the planning stage. Since the erection of this vast complex on the hilltops of Morenci, the role of Clifton has changed. No longer directly involved in the physical process, the town, with characteristic enterprise, has evolved into a trading center for the ranching and farming regions lying southward.

And perhaps its brightest future lies in its attraction as a tourist center. As the natural gateway to the Coronado Trail, it is also the entrance to Arizona's most remote and splendid recreational area. Since tourism's value has increased by leaps and bounds each year, it is not out of reason to think that it may one day exceed that of all of Clifton's earlier hey days rolled together.